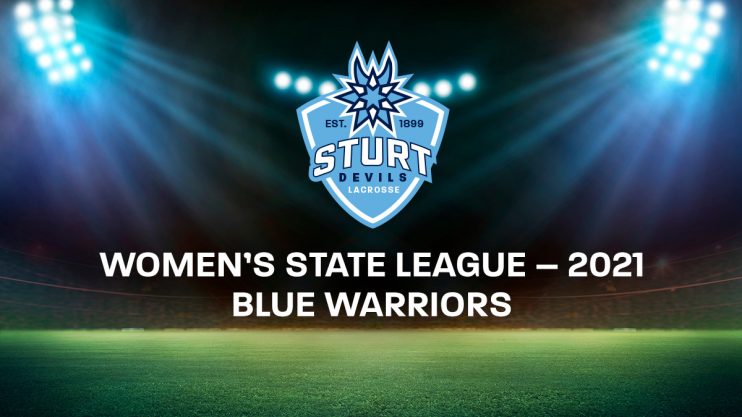 The State League Women’s Report as tabled, presented and accepted at the AGM Sunday 7 November, 2021

This year has seen an unfortunate loss of a number of key senior players from this group.

Due to previous late starts around this playing group the committee’s decision to move quickly to secure a 2021 combined side with Woodville for a second year as the Blue Warriors brought some excellent success on the field finishing 3rd on the ladder and provided the current group a sense of certainty about the future of there lacrosse.

This has shown us as a club the development of this structure early can be key to the success of our players with marked improvements shown in each of the girls this year.

Even though the playing group is small with only 5 players they are the backbone of the senior players group and have seen substantial playing time on the field. Each of the players has confirmed they will be looking at continuing with Sturt Lacrosse club if the same option continues with the Blue Warriors for the 2022 season.

Even though we only have 5 girls currently in the squad, I can see benefits with this continuing as the opportunities open up for us to have a number of Friday night games under lights with the club facilities providing revenue raising and profile building for Sturt. This also provides an opportunity for possible pathways for other younger players from our Div 1 group.

Unfortunately I do not see Sturt having the capacity to field a team on our next season in State league as such I would suggest that the new committee looks at a discussion with Woodville to secure a decision early to allow us to plan strategically for training and games that can be played under lights.

The Sturt league women merged again this year with Woodville and had Coach Lee Haskett join the merged team.

After a few training sessions it was obvious that the team was in for a strong coach who wasn’t going to let them get away with much.

They trained hard and played hard. It showed with Lee awarding two Sturt players trophies at the end of the year.

Only two teams could beat them all season, and they had the smallest margin in score with the undefeated top team.

They finished third on the ladder with the team getting to play at Norwood this season. It’s the first time the Sturt girls have made it to finals in a very long time.

Hope to continue with the group next year but that is yet to be confirmed.

Have your say and get involved in how our club evolves over the next season.

2022 is shaping up to be huge for Sturt Lacrosse Club. The pain and awkwardness of the 2021 season will be a distant memory when we gather under our new roof and run out onto amazing new playing fields. 🎊

Exciting opportunities to get involved are up for grabs and we want you if you've got ideas, suggestions and are willing to give a bit of time to your club.

Come along to the AGM on **Sunday 7 November from 3.30pm in the Flinders Room at the Tonsley Hotel**.

If everyone gives a little, the results will be enormous!

Wishing our U15 boys every success in the Grand Final tomorrow! It's an early game (8am!!) so leave a message and wish them, @paulkernaghan and @skilford13 the best of luck! ...

The next best thing to being there in person … watching on @lacrossesatv Go Blue Warriors!! ...

Get along to Glenelg to support our Blue Warriors in their finals campaign! Special shout out to our own @biancamckay15 , @kirraly.13 , @anastasia_ritchie_ , @makayla_ritchie and @tam.aufderheide ... go you Blue Devils! 🥍

Congratulations to our men’s State League team in what coach Tony Watts described as “gutsy”. 7-4 against @warriorslax in a must win for our finals campaign. Go you blue Devils! #sturtlacrosse #lacrossesa #lacrosse #lax #laxlife #aussilax ...