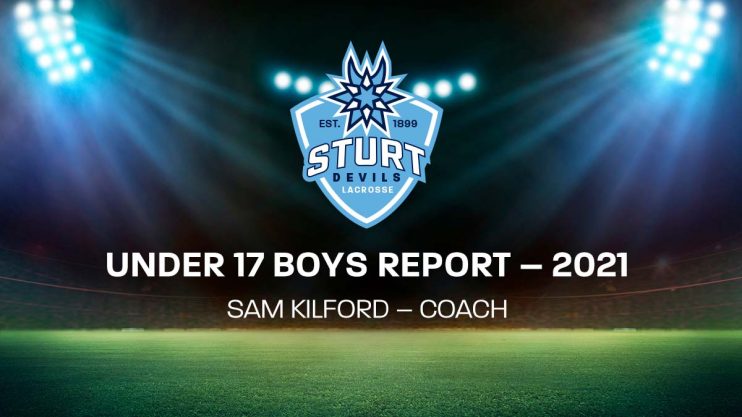 The Under 17 Boys’ report as tabled, presented and accepted at the AGM Sunday 7 November, 2021

Whilst numbers where good we sat around the 9 to 10 actual U17s boys and were once again reliant on u15s coming up. With burnside in the same position as us we formed the blue bears. Working with the burnside coaches Kieran and Adam, our boys experienced something I believe all players should: an opportunity to learn from high level players outside of their own club.  Our players seemed to grow under the opportunity to learn from 3 coaches and even to teach and learn from other players from the Burnside team.

Overall, I believe the team was a success. Even though we fell short in finals the way the boys came together and rallied around each other was inspiring.

Some of our players were rewarded with an A grade opportunity, and I believe that most, if not all, of this years U17s will shortly make moves into the senior ranks. Training with the u15s, I believe was more useful for the 15s than the 17s, but im happy they did as it seemed that the entire group was well rounded and getting better each week.

Going forward, we should endeavour to stay as a stand-alone club team to ensure the most game-time and development for our own kids, as they move through the ranks. If we are to combine again we should do so with a club who is really struggling so we have the majority of numbers and not a 50/50 split.

Again, I think this year was a real success as a once off for our kids to learn and grow outside of the sturt lacrosse club, and I would encourage most players to put their hands up for the U18s tournament coming up in 2022, to be held in Adelaide.

Have your say and get involved in how our club evolves over the next season.

2022 is shaping up to be huge for Sturt Lacrosse Club. The pain and awkwardness of the 2021 season will be a distant memory when we gather under our new roof and run out onto amazing new playing fields. 🎊

Exciting opportunities to get involved are up for grabs and we want you if you've got ideas, suggestions and are willing to give a bit of time to your club.

Come along to the AGM on **Sunday 7 November from 3.30pm in the Flinders Room at the Tonsley Hotel**.

If everyone gives a little, the results will be enormous!

Wishing our U15 boys every success in the Grand Final tomorrow! It's an early game (8am!!) so leave a message and wish them, @paulkernaghan and @skilford13 the best of luck! ...

The next best thing to being there in person … watching on @lacrossesatv Go Blue Warriors!! ...

Get along to Glenelg to support our Blue Warriors in their finals campaign! Special shout out to our own @biancamckay15 , @kirraly.13 , @anastasia_ritchie_ , @makayla_ritchie and @tam.aufderheide ... go you Blue Devils! 🥍

Congratulations to our men’s State League team in what coach Tony Watts described as “gutsy”. 7-4 against @warriorslax in a must win for our finals campaign. Go you blue Devils! #sturtlacrosse #lacrossesa #lacrosse #lax #laxlife #aussilax ...