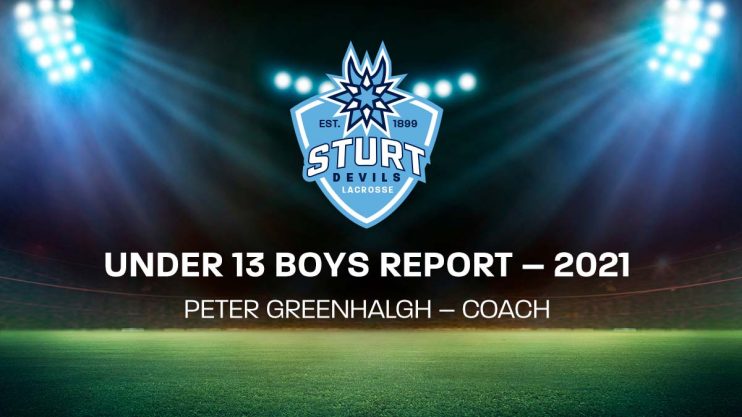 The Under 13 Boys’ report as tabled, presented and accepted at the AGM Sunday 7 November, 2021

Having this many players was a great challenge to have but when we played clubs who forced the 8-a-side, managing the bench was an extremely tough ask. For the most part, the coaches were able to try and manage the bench so that everyone was getting a run and we were still competitive.

As a team we really focussed on body position defence and working hard as a team to get the ground ball. We often were complemented on how hard the boys played in defence as our body position would often force the other teams to make forced errors. We stressed that stick checks, particularly at this level, are more often going to get you a penalty rather than turn the ball over.

I would like to personally thank the following people specifically …

Jacob Newman – Assistant Coach. Jacob helped warm the boys up among other things. He was great to leave with the team if I needed to deal with individuals, umpires… or even parents! Jacob is a great role model for these boys and I hope he continues to volunteer his time to work with our kids.

Mark Norton – Referee. Mark refereed EVERY game. Again, it was great knowing that he was there and again was something I didn’t have to worry about!

In general, all the parents. Chauffers, PA’s, and supporters! I only had to tell them off a couple of times!

Paul Scuteri – the man is a legend and has done a fantastic job to date with recruitment. He recruited 3 absolute superstars to our team this year!

The committee – just for being there. The club would run with out your hard work!