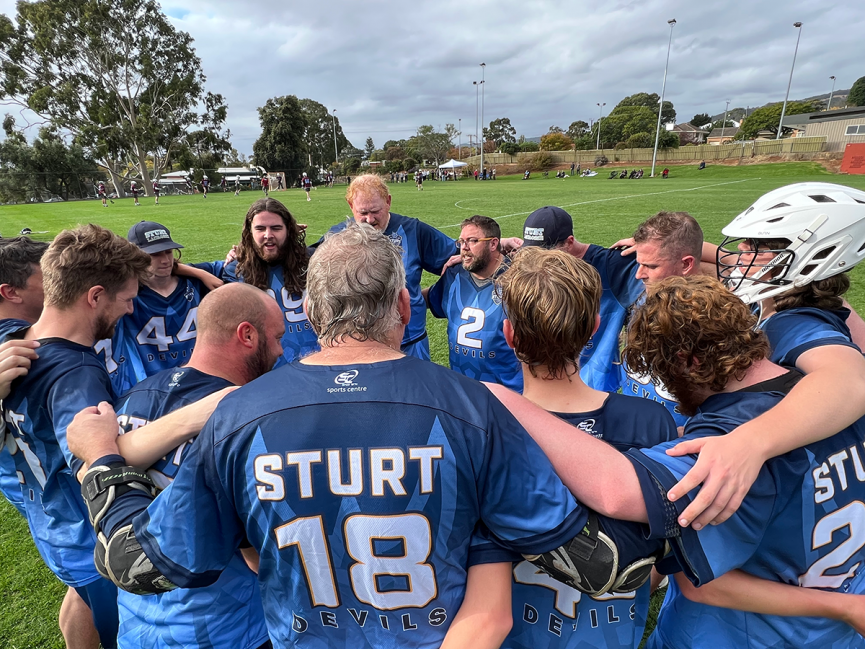 Depleted numbers worked against our mens teams at Burnside last weekend in a double header for the Div 1 and State League sides.

In the Div 1 match, out-of-retirement Nathan Tuck won the majority of the face-offs but we were low in confidence in the midfield. There were some good signs though, with promising youngsters in Ben Clarkson and Finn Ewer putting in solid performances. Our two P’s (Peter Green and Peter Greenhalgh) were our two goal scorers and it was great to see Vice President Mike Ewer take to the park in only his fourth game. Burnside ran in winners 10-2. Congratulations to Best Players: Brock Usher, Ben Clarkson, Peter Green, Sean Correll and Nathan Tuck. We look forward to this week’s match against Woodville where we will hopefully welcome back a few more players to the team.

Our State League men followed in the annual Shock’s Trophy match – in memory of Anthony ‘Shocks’ Monroe – in what is always a passionately fought contest. We missed the steadying hand of head coach Tony Watts but thank Paul Kernaghan and Peter Greenhalgh for stepping in at short notice as coaches and assisting Jarrad Pangrazio who was vital as an on-field player. There were plenty of shots at goal, but accuracy let us down with a final scoreline 13-1. Congratulations to Orlando Kernaghan, Ewan Lauck and Lukas Hansford who made their debuts and to best players Ryan Stone, Ryle Kustermann, Jacob Newman, Nigel Wapper and Sam Kilford. With a bye this weekend (7 May) we have some extra time to regroup and be ready to tackle Glenelg under lights at Gala Day next weekend (14 May).